Problem-Attic has made the writing of math and science questions faster than ever!  An option for “live” or inline math provides all kinds of shortcuts plus automatic on-screen preview.

The inline math editor is based on MathQuill, a popular program for adding formulas and special symbols to a web page.  You might be familiar with MathQuill already if you’ve used the Desmos graphing calculator or various assessment tools by Learnosity.  Problem-Attic’s implementation goes a bit further with:

Below you’ll find a quick introduction to the editor and all the details for producing beautiful-looking formulas for math and science.  Please give it a try.  You’ll not find a quicker or more intuitive way to type math on the web!

Note:  the math editor is a subscription feature in Problem-Attic.  However, you can use it as often as you like, free of charge, in what’s called the Play Area.  Click here to learn more.

The inline math editor is an alternative to the palette-based, or pop-up, math editor in Problem-Attic.  The latter is still available.  In fact, you should continue using it for complex, multi-line formulas.  For most other formulas and special symbols, and for mixing math and regular text, you’ll find the inline editor to be faster.  Here’s an example of what to do: 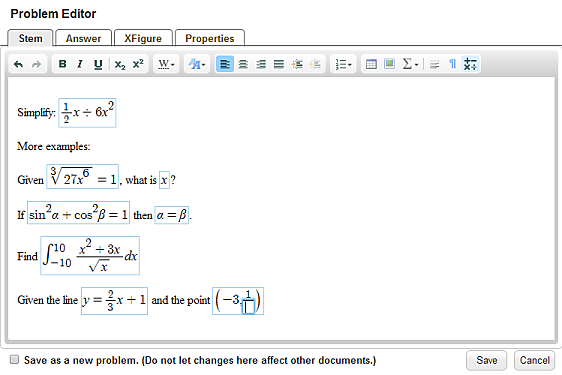 Notice how you typed \d for a divide sign?  Most other common symbols can be typed similarly, with a backslash followed by one or more letters, such as \t for a times dot and \x for a times cross.  These are called “commands”.  A fraction can be created with a forward-slash or the command \f.  You can create a radical with \r and an indexed radical with \ir.

If you are familiar with LaTeX, many of its commands also work in the inline math editor.  You have the option of using LaTeX or abbreviated commands, such as those described above.  The results are the same.  Full written-out commands, like \fraction, are also available.

For a list of all supported commands, abbreviated, written-out and standard LaTeX, please see these charts.

For a quick reference, which is printable and which shows the easiest commands to type, download this charts.

Now that you know the basics of the inline math editor, here are the finer points about how to use it.

Here is a little background information about the editor and some best practices:

You’ll certainly agree that “live” math editing is a great improvement to Problem-Attic, and you’ll probably want us to take it even further.  We’re with you on that!  Here some things still in the works:

That’s it for instructions.  Please go try the math editor and let us know how you like it.  You can write to us at support@problem-attic.com.